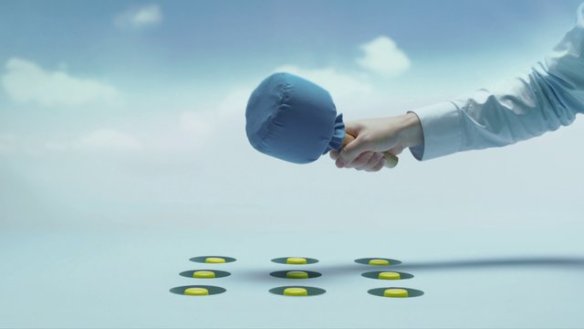 Chuck E. Cheese is a child’s paradise. It is the perfect blend of nasty pizza, sugary beverages and classic carnival games. If you have never been before, I’m sorry, your childhood was not complete.

I used to love playing the games. My parents would only let me have about 15-20 tokens on each trip, which meant I had to use them wisely. For an excited 8 year old, which game to spend my tokens on can be quite the dilemma. There was one game in particular that I found especially frustrating yet routinely I would be drawn back to it. It’s called, “Whack-a-Mole”. It is that game where you are given a huge hammer and it is your job to hit the head of the moles that pop up. You knock down one, then two more pop up, when you have those under control there is a fourth that comes out. Just when you think you got them all, that one you started with has poked its head back up at you.

As hard as you try, winning is not an option. They always come back.

Frustrating. Maybe that’s why swinging the hammer is strangely satisfying.

Sometimes life is like a game of “Whack-a-Mole”. Specifically, the Christian life.

John Owen, an old Puritan preacher said, “Be killing sin or sin will be killing you.”

I do not doubt the statement, my question is, “how do I kill sin?”

I have lived most of my life thinking killing sin meant focusing in on one issue like pride, working real hard, and slowly eliminating it. Then, when I felt I had done a good job of killing it, I was convicted about something else, lust. So I focused all my attention on that. Got an accountability partner, prayed a bunch, set up really good guidelines. I would kill it. Then I moved on to an idol in my life like money. I worked hard to kill it. It was like I was whacking one mole after another. But suddenly, after killing everything, I realize the thing I had under control 6 months ago, it was back!

It’s a frustrating game. I never win and as a result, I constantly feel inadequate.

I’m like you. I want to be more like Jesus. I want to sin less. I want to transform and become the person God created me to be.

Whack-a-sin is not working for me. Maybe that’s because God never intended for me to play the game.

“I am the vine; you are the branches. If a man remains in me and I in him, he will bear much fruit, apart from me you can do nothing.”

Jesus simply says, “If you want to bear fruit – demonstrate transformation – then remain in me.”

I do not want the story of my life to be about the sin I stopped doing but about how I became more like Jesus.

I am not minimizing the terrible nature of glory stealing sin. I want to attack all aspects of my life that steal God’s glory and give it to someone or something else.

When I begin to press into Jesus (remain in him) and really let him change my heart, the mole goes away without me having to whack it. It is not so much that I destroyed pride, but I pressed into Jesus and began to live out his example of humility.

Whack-a-mole is frustrating, tiring, and demoralizing. Whack-a-sin is worse. Maybe you are exhausted because you are fighting sin with a giant hammer. Put down the hammer, Jesus already conquered sin. He is inviting you into a new reality, one where he is interested in changing your heart not just your actions.

Would life be better if you could stop playing the game?